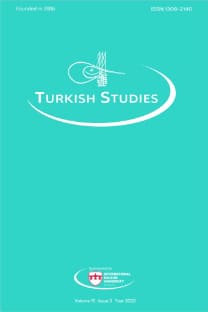 WHAT IS THE AWARENESS LEVEL OF PROSPECTIVE ENGLISH LANGUAGE TEACHERS WITH REGARD TO CEFR AND ELP?

POETRY WRITING WITH THE CREATIVE WRITING METHOD AVAILABLE IN THE "NETZWERK B1.1" COURSE BOOK IN TEACHING GERMAN AS A FOREIGN LANGUAGE