Autism spectrum disorder (ASD) is a disease characterized by interaction and communication deficiencies. Patients diagnosed with intellectual disability (ID) exhibit deficiencies in at least two behaviors associated with adaptation skills. The high level of association between neurodevelopmental diseases, especially ID, and ASD clearly reveals the presence of etiopathogenesis with an underlying multi-factorial and possibly a common genetic background. The SYNGAP1 gene has been associated with both ASD and non-syndromic ID. We report the case of a 13-year-old adolescent with SYNGAP1 gene mutation diagnosed with ASD, moderate ID, and epilepsy. The motor development of the patient, who had started walking at the age of 4, was delayed, and his language development was evidently inadequate since he still had no word. Stereotypical behaviors were observed with insufficient social interaction. As a result of the genetic analysis, the patient was determined to be heterozygous for a single nucleotide change (C>T) resulting in a false sense of mutation at position c.3134 in exon 15 of the SYNGAP1 gene. Thus, the present study aimed to contribute to the knowledge base on patients with rare SYNGAP1 mutation that plays a role in the etiological background of ASD, ID, and epilepsy comorbidity. To the best of our knowledge, this variant has not been reported in the scientific literature to date.
Tam Metin 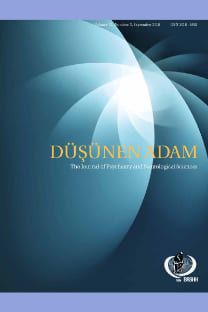 Atypical demyelinating lesions due to synthetic cannabinoids: a case report

Risperidone-induced tardive dystonia in a 10 years old boy and the efficacy of aripiprazole: a case report

The assessment of the relationship between narcissism, perceived parental rearing styles, and defense mechanisms

Brief psychotic disorder due to ephedrine

Does late and early onset depression differ in terms of inflammation?