A Comparative Study: Existentialism in No Exit by Jean Paul Sartre and Shadowless by Hasan Ali Toptaş

Öz Existentialism has influenced a lot of literary works throughout history. Existentialismcan be studied in literary works by means of foregrounding the existentialthemes and techniques. Some of these themes are being, change, freedom, selfcognizance,isolation, responsibility, free-will, and alienation. Traversing the boundarybetween philosophy and literature, this essay aims to analyse the existentialthemes of Jean Paul Sartre’s No Exit or Huis Clos (1944) and Hasan Ali Toptaş’sShadowless1 or Gölgesizler (1993) with an intertextual and comparative approach.This essay considers Sartre’s No Exit and Toptaş’s Shadowless as postmoderntexts. Before exploring the existentialist themes and techniques in No Exit and Shadowless,this study aims to discuss the tradition of existentialism in literature. Afterpresenting an introductory review on such existentialist concepts in literature asexistence, essence, freedom, angst, and absurd, some recurrent themes in Sartre’sand Toptaş’s works will be highlighted and analysed. After a brief exploration ofthe influence of existentialism on Turkish literature, the essay will focus on thetextual analysis. No Exit will be analysed from the perspective provided by suchconcepts as “being-for-itself”, “being-for-other”, “isolation and claustrophobic existence”; as for Shadowless, “being and nothingness” and “anxiety of uncertainty,emptiness and meaninglessness” will serve as the existential themes reflectedin the novel. Within the framework of existentialism, an intertextual approach toand a comparative analysis of Shadowless from Turkish Literature along with NoExit from French Literature is an attempt of situating Modern Turkish Literaturewithin the broader regional and global context. As a last point, this paper also aimsto contribute both to critical studies on Sartre’s work and scholarship on the woksof Hasan Ali Toptaş work whose works of fiction have rarely been discussed froma comparative or world literature studies perspective.
Anahtar Kelimeler: 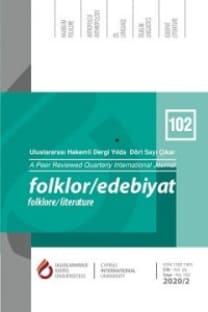