Turkey is rich in many of the wild relatives of temperate crops including lentil (Lens cuhnaris Medik. ssp. culinaris). It is only in Aegean and the south west that the distributions of all four wild taxa of the genus Lens ( L. culinaris ssp. orientalis, L. odemensis, L. ervoides and L. nigricans) overlap. Unfortunately, Turkey, like other Mediterranean countries is suffering the rapid loss of many of its valuable genetic resources. An ecogeographic survey and collection misssions were thus undertaken in Aegean and south west of Turkey with four main objectives: to increase the number of accessions, of each taxon, from these regions conserved ex-situ; to collect samples for the analysis of withinpopulation variation in order to assess the potential for in-situ conservation; to determine habitat preferences for each species and the major determinants of their distribution; to evaluate the threat of genetic erosion to each species. Collections were made from 37 populations, and 20-30 seeds from at least five populations of each taxon were collected for the study of withinpopulation diversity. Ecogeogaphic data was collected to determine habitat preferences. Based on evidence of grazing pressure, number of populations located, area covered by a population and the number of plants per population, L. odemensis and L. ervoides are the taxa most threatened by genetic erosion. The low association of all species with disturbed habitats indicates their vulnerability.
Keywords: 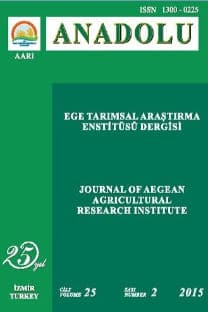