It is aimed to reveal the level of understanding messages send by graphical symbols and to make a study that would compensate for missing learning of students who study at eighth class. An activity was conducted in which a single group pre-test and post test pattern method was used with 58 students studying in eight class of Alata Secondary School in Erdemli district of Mersin within this context. At the beginning of the process, “Matching Questions for Understanding the Messages of Graphical Symbols Correctly” has been applied as pre-test to the students. A video had been prepared by the researcher and which contains the importance, purpose of using and the meanings of graphical symbols they encounter in their schools and products they buy from school canteen was showed after the test. Finally the matching questions were applied to the students again as post test. In findings, these have been found that the students were not aware of the meanings of all the graphical symbols they already met but the activity based on the prepared video developed the skills of understanding the messages of graphical symbols correctly. It is thought that these study conducted could provide data for those who will research on visual reading, in particular teaching of graphical symbols.
Tam Metin 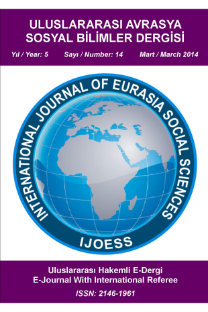 A FIELD RESEARCH ON RELATIONSHIP BETWEEN ALCOHOLIC BEVERAGES, DRUGS AND CRIME

ROMANTIC RELATIONSHIP METAPHORS OF UNIVERSITY STUDENTS: IS LOVE A TERRACE ON THE HOUSE OVERLOOKING THE SEA?

THE EFFECTIVENESS OF COST-ORIENTED PROJECT MANAGEMENT PROCESS IN BUSINESSES

IS IT POSSIBLE TO IMPROVE SELF-EFFICACY WITH COACHING?