Background. Although the relationship between umbilical cord clamping time and various parameters such as hemoglobin (Hb) levels, iron deficiency, and risk of neonatal jaundice has previously been studied, to the best of our knowleadge there have been no studies investigating the relationship between cord clamping time and the risk of significant hyperbilirubinemia. We aimed to investigate the relationship between the time of umbilical cord clamping and transcutaneous bilirubin (TcB) measurements made on various postnatal hours, Hb and serum total bilirubin (STB) levels measured on postnatal 4th day, and the risk of development of significant hyperbilirubinemia requiring phototherapy treatment. Methods. Eligible newborns were divided into two groups on the basis of the time of cord clamping: those clamped late (60 seconds or more; Group I) and those clamped early (less than 60 seconds; Group II). Groups were compared with respect to the parameters of cord Hb, postnatal TcB measurements at 6th, 48th, 96th and 168th hours, and 96th hour Hb, STB and direct bilirubin levels. Results. TcB levels at the 96th and 168th hour were significantly higher in Group I when compared to Group II (p
Tam Metin 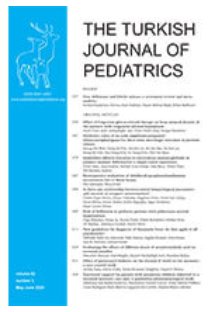