Anesthesia management of preterm infants is challenging for the anesthesiologist. Because of the rudimentary build of the infants, many medical and physical problems have been observed in the treatment of the disease such as complications, airway problems, temperature disregulation and deficient drug metabolism. This retrospective study evaluates the perioperative management and postoperative course in premature infants undergoing diode laser photocoagulation (DLP) for retinopathy of prematurity (ROP). We analyzed the preoperative data, anesthesia chart, and postoperative course of 15 preterm infants for general anesthesia exposures for ROP surgery. Minimum weight and gestational age at birth were 480 g and 23 weeks, respectively. Mean value of weight at birth was less than 1000 g (886,3g) differently from other studies. The mean anesthesia and surgery duration were 80,9 and 60,4 min, respectively. Paracetamol was implemented for postoperative analgesia through rectal route in 5 infants and intravenous route in 10 infants at the start of surgery. Eleven patients were extubated in the operating room and 4 infants were extubated in the following days. Birth weights of infants were between 480 and 1240 g. Supraglottic airway such as I-gel was applied in 5 infants, laryngeal mask airway (LMA) in 5 infants and endotracheal intubation (ETI) was applied in 4 infants. In the present study, we found that intraoperative complications, duration of anesthesia and surgery were acceptable and similar to those of other studies. However, the value of apnea in current study was less significant when compared to other studies,which can be correlated with intubation without muscle relaxant or post-conceptual age over 35 weeks.
Tam Metin 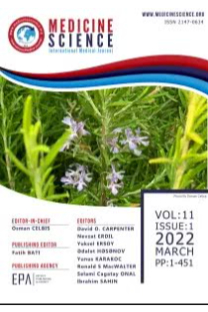 Does Osteoporosis with Type 2 Diabetes Mellitus (Diabetoporosis) increase the risk of fracture?

Multigravidas’ perceptions of traumatic childbirth: Its relation to some factors, the effect of previous type of birth and experience