Objective: Burn-out affect was shown every occupational groups. Security guards at hospitals are at more risk because of their exposure to violence and their workload. The aim of this study was to investigate the relationship between the situation of being exposed to violence and the burnout in security guards at hospitals. Methods: Study was performed between April and June 2017 at 6 hospitals from 3 different cities in Turkey. A self-report questionnaire was performed and filled by participants with face-to-face interaction. Questionnaire was consisting of 15 items towards variables that might cause burn-out syndrome and sociodemographic variables. Maslach Burnout Inventory was used to measure burn-out level of the participants. Statistical analyses were performed using SPSS. P < 0.05 was statistically significant. Results: Participants were 215 security guards. 65.5 % (n=141) were exposed to verbally violent and 40.9 % (n=88) were exposed to physically violent acts during the past 12 months three times or more. There was statistically significant relation between exposure to verbal or physical violence in last year and Maslach emotional exhaustion scores. There was significant relation between Maslach depersonalization scores of the security guards who exposed to physical violence in last year, but it was not significantly at whom exposed to verbal violence in last year. Conclusions: We found that as burn-out increased with exposure to violence. Therefore we suggest that security guards need to be educated about coping with violence and communication; also should evaluated physiologically within periodic examination.

Zhang B, ZhangLi, Zhang N. Research on the relationship between job burnout and turnover intention among clinical nurses born in the 80s. J Clin Nurs 2013;28:16–8.

Beech B, Leather P. Workplace violence in the healthcare sector: a review of staff training and integration of training evaluation models. AggressionViolentBehav 2006;11:27–43.

Collins PA, Gibbs CC. Stress in policeofficers: a study of theorigins, prevalence and severity of stress-related symptoms with in a county police force. OccupMed 2003;53:256–64.

Ergün FS, Karadakovan A. Violence towards nursing staff in emergency departments in one Turkish city. IntNursRev 2005; 52: 154-60.

Chen S.Work place violence and its effect on burnout and turn over at tempt among Chinese medical staff. Archives of environmental & occupational health 2016;71: 330-7. 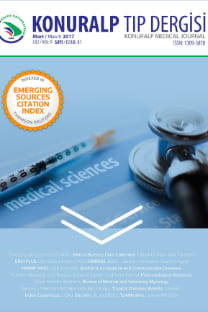