Öz Deflection of the vertical is used in geoid modeling for reducing geodetic measurements to ellipsoid plane in geodetic networks vertical and horizontal angle observations and distance measurements . Generally it is obtained using astro-geodetical and gravimetrical techniques which are very difficult and timeconsuming. The ellipsoidal coordinates of points are easily achievable using the satellite position determination techniques as GPS in geodesy. In the case of determination of orthometric heights for the points with geometric leveling, the geoidal height differences and the components of the deflection of the vertical components can be calculated much more easily and faster than the other techniques using GPS and leveling measurements. In this study, the computation of the deflection of the vertical components from GPS and leveling measurements are discussed. Moreover, the values obtained from both GPS and leveling measurements are compared with global geoid models, namely EGM96 and CG03C, and local geoid model TG03 . The components of the deflection of the vertical / north-south and 0 east-west are obtained as /=-4,15”±0,61”, 0=8,75”±0,69” from GPS and leveling, /=-5,64”, 0=1,95” from EGM96 geoit model, /=-4,85”, 0=1,82” from CG03 geoit model, /=-7,47”, 0=-0,51” fromTG03 and /=-3,9”, 0=4,6” from Astro-Geodetic deflection of vertical map of Turkey which was drawn by Ayan 1976 . When the values obtained from GPS and leveling measurements are compared with the ones from other methods, the north-south component approximately has been found to be consistent with each other while there are some discrepancies at east-west direction. It is rather not surprising to obtain non-comparable results especially in the absence of sufficient data about terrestrial gravity relating to Turkey in the global geoid models EGM96 and CG03C .
Anahtar Kelimeler: 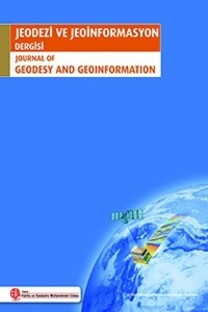