Öz The Customs Union (CU) led to the barriers removal and free trade between Turkey and the Eurpean Union (EU) which inreased trade transactions volume with the EU as Turkey's largest trade partner. On the other hand, the EU has been continuing to work intensively for bilateral trade negotiations. The bilateral trade negotiations have become a priority for the EU that deepened its relationship especially with The United State of America (USA). As the EU began negotiations with the USA, the economy with high trade volume, it has brought about some concerns in Turkey as for the Customs Union between two of them. Particularly because of the fact that the USA products will be able to enter Turkey duty-free via EU, while the USA will continue applications such as tariffs to Turkish export products, which are the basic factors for the this concern. This situation is expected to disrupt the current trade balance of Turkey. Taking the above into consideration, Granger causality and impulse-response function have been calculated. According to the result of the analysis, it has been determined that there is a causal relationship between the EU-USA trade and Turkey-USA trade. When the EU-USA impulse-response function random shock occurs, according to the findings, it adversely affects the trade between Turkey and the USA.
Tam Metin 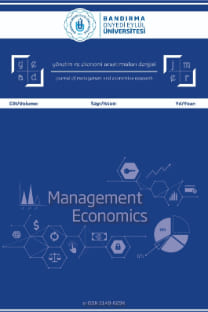 POLITICAL ECONOMY OF THE EUROZONE DEBT CRISIS: AN EVALUATION IN THE CONTEXT OF SOUTH AND NORTH EUROPEAN CAPITALISMS