Objectives: Infections in infants<90 days old are the leading cause of morbidity and hospitalization in neonatal practice. The etiological agents of sepsis (with or without meningitis) in Saudi neonates <90 days old are vastly under-characterized. The aim of this study was to determine the bacterial etiology of neonatal sepsis and meningitis in these infants. Materials and methods: This retrospective study was conducted in King Khalid University Hospital, Riyadh, in the period from January 2007 to January 2011. All infants<90 days old with suspected sepsis during this period were examined for evidence of infection. Cultures, including blood and Cerebrospinal fluid (CSF) were performed for all neonates. Results: A total of 304 cases of sepsis in infants <90 days were investigated. Community-acquired neonatal sepsis composed 284 of the studied cases present after the age of one month, while 20 infants were identified as having neonatal sepsis in the first month of life. Only 12 blood cultures were positive (four isolates of Staphylococcus epidermidis, two Staphylococcus aureus, two Staphylococcus hominis, one Enterobacter cloacae, one group B streptococcus, one diphtheroids and one with Bacillus species). Only three cases yielded positive CSF cultures. The first of these was positive for Aeromonas hydrophila, the second for Clostridium tertium and the third for Escherichia coli. Conclusion: Suspected sepsis in infants <90 days old is relatively common in this hospital, with 304 cases in a four-year period. However, positive bacterial cultures were rare, constituting only 5% of the suspected cases.
Tam Metin 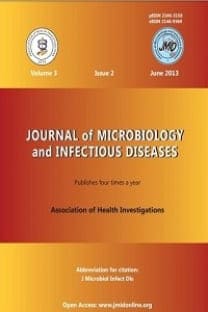 Attitudes and behaviors of Family Physicians regarding use of antibiotics

A case with chronic hepatitis B and anterior uveitis - Is there any connection?