Öz A diverse and abundant Early Eocene (middle-late Cuisian) molluscs assemblage from the Yoncalı Formation of the Çankırı Basin in central Anatolia is documented for the first time in this study. Sixspecies of bivalves, four species of gastropods, and one species of scaphopod are described from the formation. The central part of the Yoncalı Formation consists mostly of sandstones, pelagic mudstone and limestones with harpactocarcinids and the molluscs found were derived from this part. Associated fauna found here included benthic foraminiferans, serpulids, undetermined echinoids and shark teeth, and dating was mainly based on the benthic foraminiferans. The distribution of bivalve, gastropod and scaphopod species suggest that this area has affinities with the East European Province of Turkey. The cosmopolitian distribution of the recorded species is useful for paleobiogeographic reconstruction. This reveals that there was a direct connection throughout the Tethyan realm and a connection between the Tethyan central Anatolia and Indo-Pasific realms, at least until the end of the Paleocene to Early Eocene (Early Tertiary), and this allowed the migration of benthic organisms.
Anahtar Kelimeler: 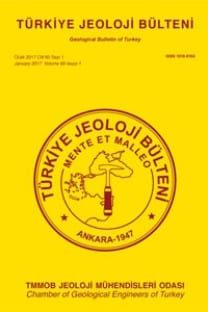