Öz The prostate glands of buffalo bulls were collected from an abattoir immediately after slaughter and were fixed in 10% neutral buffered formalin for paraffin block preparation by an acetone-benzene schedule. Paraffin sections of 3-5 μm were obtained on glass slides with a rotary microtome and were stained with various histomorphological and histochemical stains. The distributions of glandular acini and ducts were variable throughout the length of the pelvic urethra. The disseminate part of the prostate gland was derived from the epithelium of the pelvic urethra and was a compound tubulo-alveolar type of gland. The glandular acini comprised three types of cells, i.e. principal (serous cells), mucous, and narrow dark cells. In winter, the lumen of the acini became wider than in summer. The amount of glandular tissue decreased from winter to summer, whereas a reverse pattern was observed in the stroma. The prostatic concretions were larger and centrally placed during winter but became peripheral in summer. The average epithelial height of prostatic acini varied significantly between seasons. The activity of neutral mucopolysaccharides, basic proteins, lipids, and phospholipids was higher in winter than summer, whereas that of acid mucopolysaccharides was higher in summer than winter.
Anahtar Kelimeler:

14. Chandramouly KN. Studies on the histology of prostate in the Indian buffalo (Bos bubalis). Mysore Journal of Agricultural Sciences 1971; 5: 32-38.

18. Gupta AN, Singh Y. Histological and histochemical studies on the prostate gland of goat. Indian Journal of Animal Science 1982; 52: 82-89. 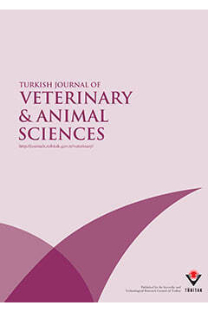 Identification of microbiological, physical, and chemical quality of milk from milk collection centers in Kastamonu Province