The patient was an 8-month-old girl. Her prenatal ultrasonography at 26 weeks of gestation revealed an abdominal cystic lesion. After birth, the patient was diagnosed with left hydronephrosis and referred to our hospital. Ultrasonography showed grade IV hydronephrosis in the left kidney. MAG3 scintigraphy showed no function in the left kidney. Cystoscopic retrograde pyeloureterography revealed advanced stenosis throughout the entire length of the left ureter. For intraoperative finings, the ureter was extremely thin with 2.6 mm outer diameter and the renal parenchyma was mostly scarred. Since it was difficult to place a stent in the ureter, nephrectomy was performed. For pathological findings, fibrosis with cartilage tissue in the residual renal parenchyma was observed and renal dysplasia was confirmed. Nephrectomy should be considered for advanced ureteral hypoplasia in patients with the entire ureteral hypoplasia because the diseased kidney is often accompanied by dysplasia or severe hypoplasia.
Tam Metin 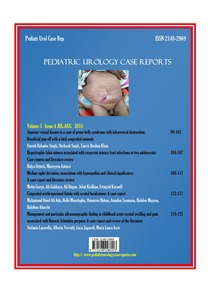 Pseudoexstrophy associated with penile duplication and hypospadias: A case report and literature review