This study has presented information in order to reveal the general condition of the activities of public aquariums in Turkey. Firstly, the location and number of public aquariums in Turkey are determined. Afterward, survey questions were prepared, which could show these business profiles. After the surveys have been prepared, some businesses were visited and the authorities were talked face to face. The business officials whom we could not visit were contacted by telephone and e-mail. In the survey, care has been taken not to ask for information that may transgress the public disclosure policy. The right to answer every question is left to the authorities’ preference. For these reasons, the information provided about the enterprises can only be sufficient to reveal the general profile of the enterprises. According to this survey, a total of 13 large public aquariums in Turkey have been identified in 2019 and there is a large tunnel aquarium under construction. While 5 of the public aquariums of Turkey are in İstanbul, and 3 of them are located in Ankara, there is one public aquarium in Antalya, Bursa, Diyarbakır, Eskişehir and İzmir provinces. The majority of these aquariums (8) are located in or near shopping centers, the others (5) were located in the parking areas. In aquariums, whereas sea creatures are allocated more space, the areas reserved for freshwater creatures are less. Most of the aquariums have educational activities as well as entertaining activities. Aquaculture engineers, aquaculture technicians, aquanauts, veterinarians, biologists, graduates of fisheries technology and underwater technologies are the occupational groups that are employed in public aquariums.
Tam Metin

Brunner, B. (2003). The ocean at home: An illustrated history of the aquarium. New York: Princeton Architectural Press. 143p. 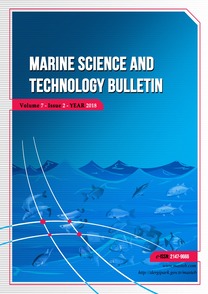 The presence of bristlemouth, Gonostoma denudatum (Rafinesque 1810), from the coast of Northern Cyprus (Northeastern Mediterranean)

Diet composition of bluefish Pomatomus saltatrix (Linnaeus, 1766) in the Sea of Marmara