Öz In this study, animal biomass energy potential of Turkey was presented in detail based on the countrywide livestock. Animal biomass resources were examined under three major groups: bovine, small ruminant, and poultry. Bovine animals were described in terms of three different cattle species, buffalo and other species (horse, donkey, camel, mule and pig). Sheep and goat were considered as two subspecies of small ruminant. Poultry consisted of two different chicken species, turkey, goose and duck. The status of animal biomass in Turkey and its exploitation by use of anaerobic digestion and consequent combustion of methane produced for energy production were presented. A detailed analysis was made to determine which animal species has high energy potential of biomass. The potential of energy, waste and the production depending on every single subspecies were indicated in the analyses. The waste coefficients for species were obtained from the biomass energy potential atlas of Turkey and the animal production data reported by the Turkish Statistical Institute. Additionally, energy potential changes in recent years for every single species were calculated. According to the results, bovine animals possess 67.1% of total energy potential, and among bovine animals, cattle has the highest energy potential with 61%. Results indicated that 1.36 million tons of oil equivalent would be exploited by the animal biomass potential of Turkey according to the 2016 data.
Anahtar Kelimeler: 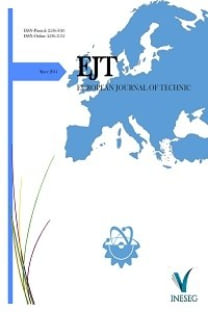 MECHANICAL PROPERTIES OF THE COMPOSITE MATERIAL PRODUCED BY THE MIXTURE OF EXPANDED PERLITE, WASTE MARBLE DUST AND TRAGACANTH