BACKGROUND/AIMS Depending on the demographic and clinical characteristics of patients, mortality rate is an indicator of the quality of community health and hospital-based healthcare. This study aimed to determine the mortality rate and basic demographic and clinical characteristics of critically ill patients in Northern Cyprus. MATERIAL and METHODS We retrospectively investigated the hospital records of critically ill patients who were admitted to the 14-bedded general intensive care unit of a university hospital in Northern Cyprus between August 2015 and July 2018. RESULTS In total, 734 patients were admitted to our hospital during the study period. The overall mortality rate of these critically ill patients was 27.11%. The mean patient age was 59.67±22.47 years. The average length of hospital stay was 16.33±38.20 days. The mortality rate was higher among men than among women although the average age of the female patients was higher than that of the male patients. The mean age of deceased patients was more than that of the survivors. There was no sex-based difference in this statistic. Patients accumulated between 60–79 years of age. Although most of the patients were transferred from the department of chest diseases, with most experiencing internal diseases, except for those in the age group of 20–29 years. CONCLUSION To our knowledge, this is the first study to report the mortality rate of critically ill patients in Cyprus. Our results indicate that our mortality rates are lower than those of many low-income countries.
Tam Metin 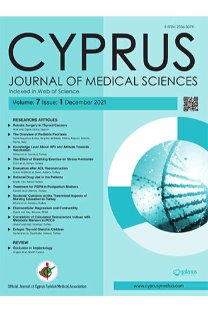 Attitudes and Behaviors of Nursing Students towards Caring Nurse-Patient Interaction

A Comparative Study on the Effect of Using Three Maternal Positions on Postpartum Bleeding, Perineum Status and Some of the Birth Outcomes During Lathent and Active phase of the Second Stage of Labor