In this study, one existing purlin system which is used in steel roof is optimized by taking into account less cost and bearing maximum load via developed software. This software runs with firefly algorithm which is one of the recent stochastic search tech-niques. One of the metaheuristic techniques, so-called firefly algorithm imitates be-haviors of natural phenomena. Behaviors and communications of firefly are inspired by this algorithm. In optimization algorithm, steel sections, distance between purlins, tensional diagonal braces are determined as design variables. Design loads are taken into account by considering TS498-1997 (Turkish Code) in point of place where structure will be built, outside factors and used materials. Profile list in TS910 is used in selection stage of cross sections of profile. Constraints of optimization are identi-fied in accordance with bending stress, deformation and shear stress in TS648. De-sign variables of optimization are selected as discrete variables so as to obtain appli-cable results. Developed software is tested on existing real sample so; it is evaluated with regard to design and performance of algorithm.
Tam Metin

TS 498 (1997). Calculation Values for the Loads to be considered in the Design of Structural Elements. Turkish Standards Institute, Ankara. 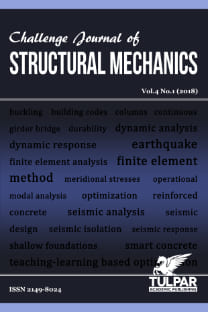