Objectives: Lung cancer is the leading cause of cancer-related mortality in both men and women worldwide. Small cell lung cancer (SCLC) represents 15-20 % of all lung cancers. The aim of this study was to evaluate the clinical features of small cell lung cancer (NSCLC) cases that were diagnosed in our clinic. Methods: The patients who were diagnosed as SCLC in our clinic were comprised the study group. The files and records of the study group were retrospectively reviewed to identify patients. The study group included 64 patients (59male, 5 female). Results: The mean age was 57.5 ±8.1 years. All patients were current smokers ( 50,3 pack-year). The most frequent symptoms on admission were chest pain, cough and weight loss. The most common radiologic finding was a hilar solid mass and hilar lymphadenopathies. The diagnosis was established by histopathologic examination of biopsy specimens obtained by various means, in which bronchoscopy was the sole means of diagnosis in 92,2 % of the patients. The stages of SCLC were limited disease in 26(29,7 %) and extensive disease in 38 (59,3%) patients. Metastasis was most frequently to the liver followed by bone and brain. Five (7,8%) patient had complete response (CR). forty nine (76,5%) patients had partial response. The median survival was 309 days, 210 days and 270 days for LS, ES and overall patients, respectively. Conclusions: In conclusion, demographic and clinical features of the patients were similar with the literature. Due to the high rates of extensive disease, the median survival rates and responses were lower than the previous series.
Tam Metin 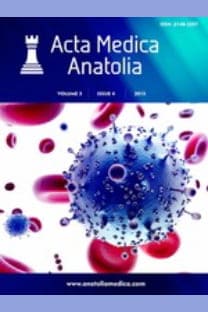 An example for the application of music therapy in the medical history: Divrigi Darüssifa