Öz In order to look into the Sephardic culture, it is most important to review the historyof the coutries where the Sephardic people have lived. Sephardic Culture originatesfrom Andalucian Muslim Kingdom where Sephardic Jews have been in veryimportant positions and became part of the culture. After the slow transfer ofhegemony in Spain from Andalucian Kingdom to Spanish Kingdom, Sephardicpeople have lived in Spain for some time and this experience has enabled them tobe a cultural and commercial bridge between Islamic and Western world.With their expulsion from Spain, Sephardic Jews have dispersed to many countriessuch as American continent, Northern Europe, Middle East, Ottoman Empire andMorocco. Their culture was preserved among the ones who emigrated to theOttoman Empire and Morocco. During the 400 years in the Ottoman Empire,Sephardic culture has adopted many aspects of the Turkish culture in the same timepreserving the Spanish origins. Spanish language continued to be spoken and anew Mediterranean music was created with styles from Turkish and Spanish music.It is possible to examine Sephardic music in two parts: Religious music and Folksongs. We can also examine Sephardic Folk songs as Cantigas and Romances.Cantiga songs have been passed on orally generation after generation and theyhave not been written down for long time and have evolved all the way. DifferentSephardic societies in different places in the world have sung these songs in parallelto the culture of the countries they have lived in.In order to keep this music which is being sung rarely nowadays from getting lost,some new musical arrangements are being done in Turkey as in other countries toenable the preservation of these songs and transferring them to future generations.I, as an opera singer, am so happy to be part of this effort.
Anahtar Kelimeler:

THE HISTORY, FORMATION AND STRUCTURE OF SEPHARDIC SONGS 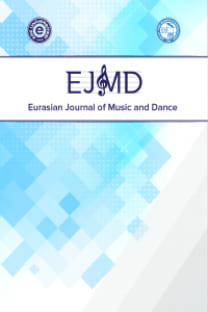