Proteolysis in the Beyaz (White) Cheese Produced From Various Milk

Öz The aim of this study was to investigate proteolysis development and peptide changes during the storage period of Beyaz (White) cheese which is produced from various types of milk, such as sheep, goat and cow milk. Three types of cheese were produced using goat, sheep and cow milk, and all analyses were performed in duplicate. Proteolytic changes were observed in cheese on the 1st day, 3rd, 6th, and 9th month. The total protein was investigated through using water-soluble nitrogen, soluble nitrogen in 12% Trichloroacetic acid (TCA), soluble nitrogen in 5% Phosphotungstic acid (PTA), and free amino acids. Proteolytic changes and peptide formations were observed during maturation by HPLC. While the total protein was 14.33% in sheep Beyaz cheese on the 1st day, this value decreased during the maturation period and reduced to 6.9% in the 9th month. These values were 13.55 and 7.95 for cow cheese and 16.30% and 7.95% for goat cheese, respectively. The water-soluble protein value increased during the maturation period. The value was 1.41% in sheep cheese on the 1st day, and increased to 6.24% in the 9th month. These values were 2.16% and 4.92% for goat cheese, and 1.79% and 8.53% for cow cheese, respectively. 12% TCA soluble nitrogen had been 0.211% at the beginning and was 0.51% in the 9th month. The ripening value based on 12% TCA changed between 9.41%-47.22%. 5% PTA soluble nitrogen changed between 0.075%- 0.25 %. The ripening value based on 5% PTA changed between 3.34-23.14. Changes in concentration of total free amino acids during cheese ripening were tracked. In water soluble extracts of cheese, the presence of free amino groups in all ripening stages was detected. It is observed that amino acids and smaller peptides-have concentration significantly (P<0.05) increased during ripening. The total free amino acid was found as 0.24 mg lysine g-1 in sheep cheese, 0.215 mg lysine g-1 in goat cheese and 0.208 mg lysine g-1 in cow cheese at the end of ripening period.
Anahtar Kelimeler:

Folkertsma B & Fox P F (1992). Use of the Cd-ninhydrin reagent to assess proteolysis in cheese during ripening. Journal of Dairy Research 59: 217-224

Guven M, Yerlikaya S & Hayaloglu A A (2006). Influence of salt concentration on the characteristics of Beyaz cheese, a Turkish whitbrined cheese. Lait 86: 73-81

Öner Z, Karahan A G & Aloğlu H (2006). Changes in the microbiological and chemical characteristics of an artisanal Turkish white cheese during ripening. LWT 39: 449-454

Polychroniadou A, Michaelidou A & Paschaloudis N (1999). Effect of time, temperature and extraction method on the trichloroacetic acidsoluble nitrogen of cheese. International Dairy Journal 9: 559-568 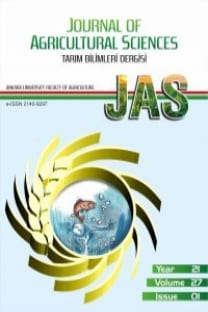 Effect of Supplementation with Green and Black Tea on Microbiological Characteristics, Antimicrobial and Antioxidant Activities of Drinking Yoghurt

Proteolysis in the Beyaz (White) Cheese Produced From Various Milk

A Visual Assessment of Roadside Poplar Plantings in Turkey

Effects of Soil Application of Neem on Some Biological Characteristics of Myzus persicae (Sulzer) (Hemiptera: Aphididae)