Lymphoma with cardiac involvement is rare; however, there can be very serious consequences. It is usually revealed in autopsy studies. Cardiac invasion by lymphoma may occur through retrograde lymphatic flow, hematogenous spread, or direct invasion from neighboring structures. Direct invasion is the most common, and has the most destructive results. The clinical signs and symptoms are nonspecific. Presently described is the case of a patient who was initially examined in a cardiology polyclinic due to exertional dyspnea and cardiomegaly seen in a chest X-ray. Echocardiographic examination revealed a suspected mass and the patient was referred to our clinic. A mass lesion filling the mediastinum and invading the right ventricle was detected in a computed tomography image of the chest. On the same day, a tru-cut biopsy with thoracic ultrasound guidance was performed by the pulmonologist. Three days after the biopsy, the patient was referred to the hematology clinic for treatment of pathological lymphoma. This case was presented to draw attention to the importance of prompt diagnosis and treatment of thoracic and mediastinal mass lesions with a multidisciplinary approach and to emphasize that a biopsy can be performed quickly and safely in patients with a mediastinal mass with the guidance of ultrasound, even when there is cardiac involvement
Tam Metin

2. Chinen K, Izumo T. Cardiac involvement by malignant lymphoma: a clinicopathologic study of 25 autopsy cases based on the WHO classification. Ann Hematol 2005;84:498–505. 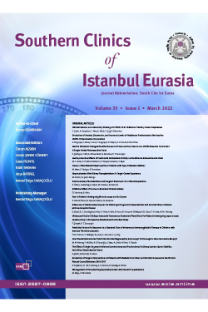 A Rare Localization of Recurrent Pleomorphic Adenoma: The Maxillary Sinus

Preoperative Evaluation of Internet Usage Characteristics of Patients in an Anesthesiology Clinic: A Survey of 1000 Patients