The State of Criminality in Tajikistan

Öz The research analyzes the quantitative and qualitative components of criminality, and focuses on the 27-year period of the evolution of criminality in independent Tajikistan. Criminal policy and statistics are examined through the prism of theory, history, practice, figures and facts, contemporary achievements of the legislation and prospects for the development of a modern society. The authors propose different variations, cite and compare the points of prominent criminologists and independent experts in the context of their accuracy and timely application. Additionally, a detailed analysis of registered crimes indicates a radical revision of the domestic system’s registration discipline, in particular, and criminal policy in general. The research analyzed the “pros” and “cons” of the social control of criminality as well as specified the collection, processing and thorough analysis of statistical data. The research takes timely decisions and a transition to the digitalization format of the entire criminal policy process. The context of the study is compatible with the strategic goals and objectives of reforming the internal affairs bodies of the MIA of the Republic of Tajikistan, which follows from the contents of the Police reform strategy for 2013-2020, the Police reform (development) program for 2014-2020, and other adopted regulatory legal acts and developed projects of these documents
Anahtar Kelimeler:

Agency for statistics under the President of the Republic of Tajikistan. (2016). Tajikistan: 25 years of state independence. Statistical compilation. Dushanbe, Tajikistan: Author. google scholar

Alexandrov, A.S., & Alexandrova, I.A. (2017). What manifesto of criminal policy we need, and what should not be manifested. Bulletin of the Nizhny Novgorod academy of the Ministry of 'Internal Affairs of Russia, N°4 (40), 337-341. google scholar

Bahridinzoda, S.E. (2016). On the introduction of criminological expertise in the Republic of Tajikistan: opinions and prospects. Actual issues of the reform ofprocedural legislation and law enforcement activity. Materials of the international scientific and theoretical conference. Dushanbe, Tajikistan. google scholar

Collection of legislation of the Russian Federation (2010), N28. google scholar

Kogan, V.M. (1977). The social properties of criminality. Moscow, Russia: Academy of the Ministry of Internal Affairs of the USSR. google scholar

Kozhevnikov, I.N. (1998). Materials of the “round table”. The problem of improving the criteria for evaluating the activities of internal affairs bodies in the field of criminality control. Moscow, Russia. google scholar

Luneev, V.V. (2016, October 10). Before proposing another reform, it is necessary to study the realities. The answer of the criminologist to the processist A.S. Alexandrov. Speech at the Round Table “Investigative Power: “for” and “against”, IGP RAS / MASP. Moscow, Russia. Retrieved from http://www.iuaj.net/ node/2100. google scholar

Ostroumov, S.S., Panchenko, S.N. (1967). The new system of criminal statistics and its importance in the work of bodies engaged in the fight against criminality. Socialist legality, N°1, 34-37. google scholar

Shepeleva, O. (2019). Crimes and punishments: what to do with Russian prisons? Moscow, Russia. google scholar

Toropin, Yu.V. (2013). Latent crime and the use of its indicators in the activities of internal affairs bodies (Candidate dissertation). Moscow, Russia. google scholar 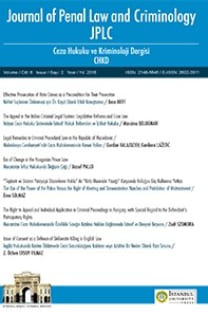 Determination of the Financial Literacy Characteristics of Prisoners: The Case of Turkey, a Developing Country

The State of Criminality in Tajikistan