Öz Following the Eastern enlargement in 2004 and 2007, a great deal of debate has centered on whether the environment factors will create obstacles to labour mobility in the European Union (EU). In particular, the removal of restrictions with the end of transition periods in most of the old EU has led to a more informal manner of discussions of whether environmental movement will be increased in short or medium run. While the socio-economic benefits of labour migration from the East to the West will likely triumph, it is generally claimed that the population of the Central Eastern and European countries intend to go abroad, but often change their minds because of the environmental well-being, such as pollution or bad weather. This article explores the possibility of the impact of environmental factors on the labour migration from the Central Eastern and Western European countries to the EU.
Anahtar Kelimeler:
Tam Metin

Jay, A. and Schraml, U. (2009) Understanding the Role of Urban Forests for Migrants Uses, Perception and Integrative Potential, Elsevire. 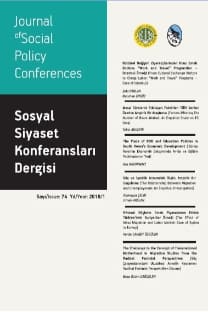