Acquisition of Ditransitive Verbs in Turkish

Öz In the acquisition of first language, among different word types “verbs” seems to be more challenging because of both the cognitive and linguistic constraints that they require. However, as Naigles & Hoff-Ginsberg (1998: 95) point out the effect of syntactic diversity in addition to frequency and positional salience leads to syntactic bootsrapping, which help children to acquire the meanings of new verbs. Thus, as children start using verbs in different combinations, they start to be aware of the abstract notions verbs denote and learn more new verbs. within this framework children also acquire syntactic and semantic properties of these verbs such as the number of arguments a verb requires and whether the language in question allow argument ellipses. The aim of this study is to investigate how children acquire ditransitive verbs in Turkish. For this purpose, spontaneous speech data collected from 10 children between the ages of 1;4 and 3;6 and their mothers has been analysed both quantitatively and qualitatively.  Six ditransitive verbs have been chosen for analysis. The results show that among the six verbs investigated, koy- (put) and ver- ‘give’ have been used more often than the other verbs by the children from the younger group. In the older group, in addition to the six verbs present in the vocabulary of younger children, new verbs have also appeared.
Anahtar Kelimeler:

Naigles, L. R.& Hoff-Ginsberg, E. 1998. Why are some verbs learned before other verbs? Effects of input frequency and structure on children’s early verb use. Journal of Child Language 25, 95–120.

Ninio, A. 1999. Pathbreaking verbs in syntactic development and the question of prototypical transitivity. Journal of Child Language 26, 619–653. 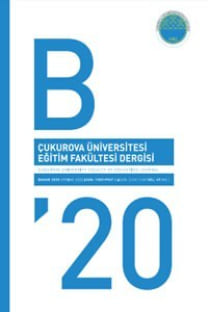